We planted  Papago on July 6, 2014 and boy was it every hot hot and dry.  It was 95 degrees the day we planted.  Every part of this soil is so dry that it is like dust, anywhere without irrigation.

Planting corn in mid summer and July is pretty late, even for here.  I prefer to spring plant everything, so that we can take advantage of residual moisture in the soil.  Note that even the weeds have dried up and crisped.  These are one gallon drippers and I turned the irrigation on the day before we planted, and then again as we planted.

After one month this corn was looking very good.  This is my favorite of all the drought tolerant landrace corns that I have tried.   This was irrigated once a week (one gallon per corn).  This was direct seeded and it was still a great stand.  Normally I plant to the field and start a tray at the same time.  If the weather is unseasonably cold I may start the whole thing to a tray.  Or if the seed is old.

By September 5 Papago was in full tassel.  Now that was fast!  There was very little incidence of disease in this corn until the very end.  Corn ear worm broke out.  Another reason to plant early.

So here's the stand just before I picked the ears on October 2.  I like the tassels to be nice and dry before I pull them out of the field.  Of course we did not have frost yet and the weather was still hot and dry.  We stopped irrigating the week before this photo was taken.  During it's growth period I fertilized it once with fish emulsion and added compost to each plant.  Which is something I do for every stand of corn.  The compost helps hold the irrigation water.   These were planted on 18 inch centers.  There are 75 plants in this stand.
Due to the good wrapper, most of the incidence of corn ear worm was at the very ends of the cobs, which I broke off when I hung the corn.  I suspect an earlier planting would help eliminate this problem.  The bright yellow corn is the Papago.  Behind it in white is the Drought Tolerant Hickory King and to the right in yellow/orange is Isola di Este. 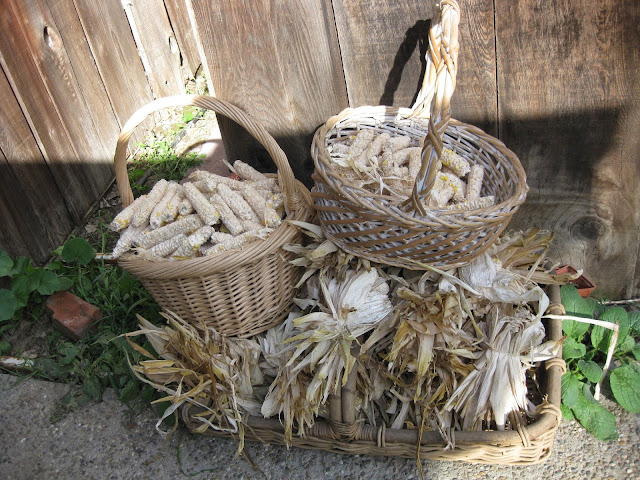 And here we are all done.  What I love about corn is that every part is useful.  These cobs and the dried husks we used in the BBQ over the winter.  So all that's left to tell you about is the flavor.

This is the best yellow corn flour!  Superb taste, easy to grind.  I was so impressed with this corn that I sent some to Glenn at Anson Mills and told him he had to taste this!

Many thanks to the Papago Indians for maintaining this corn and to Mark Millard of GRIN for recommending it for trial.  This corn is PI 217410.   This one's a keeper!