What follows are the results of the 2012 Melon Trial at Foothill Farm.  Many thanks to the USDA for providing Seed.  Many of these seeds were donated by other farmers from around the world.  Over half of these seeds were purchased by Foothill  Farm.  Not every melon in this trial is open-pollinated, some are hybrids.  Seeds were started in trays beginning the week of May 11, and transplanting was completed by July 4.  With this many melons, it would not be possible to plant or transplant all of these at one time.  Nor did we want to harvest them all at one time!

The fields were all composted, calcium was added and the seeds were started with Endomycorrhizae.  One application of fish emulsion was applied the second week after transplanting.  The melons were watered underground using drip irrigation.   On August 29, the first melon that was harvested was Yellow JB.  This melon went on to re-flower and make melons 3x during the season.  The last melons harvested came out of the field the week of October 31.

We still have storage melons in the barn.  And will continue to check them and eat them to see how long they last.  Of the watermelons, the longest storing was Winter King & Queen and Grover Delaney.  The last of these were served on Thanksgiving,  that's 45 days from harvest.  They were held at barn temperature (45-60 degrees F) with no attempt to refrigerate them. 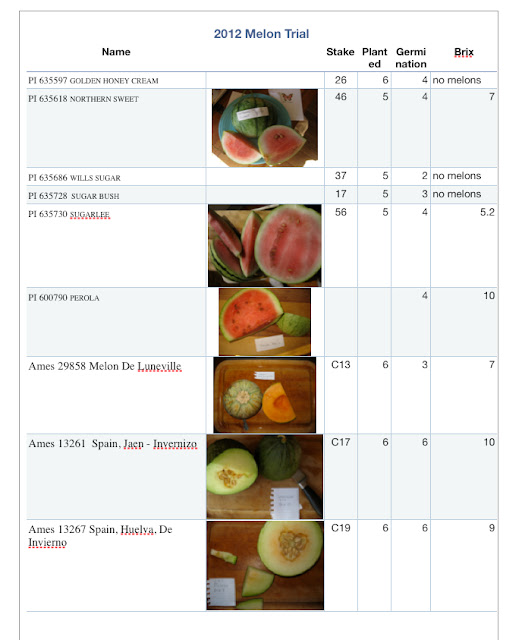 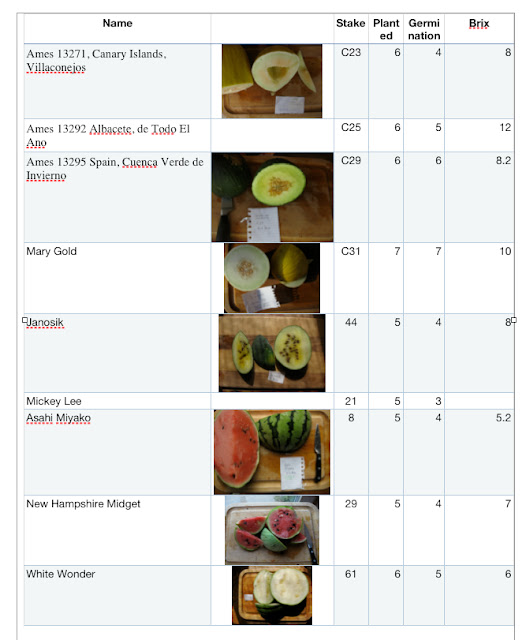 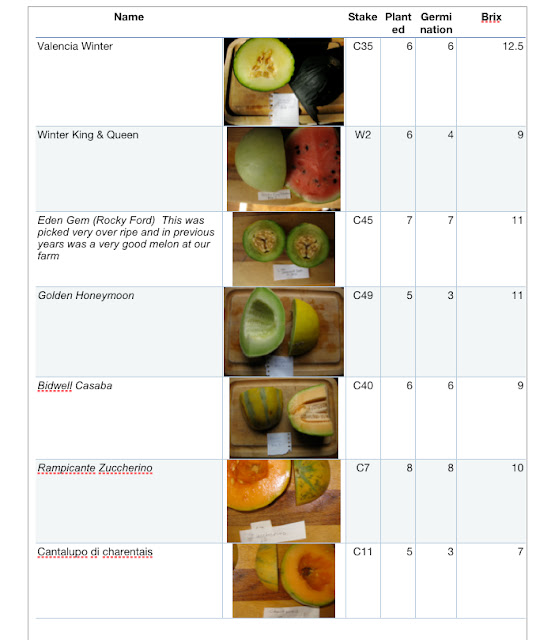 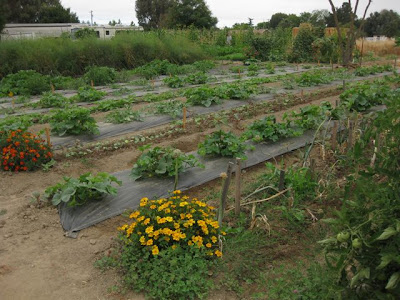 The melons were planted in wire baskets, set into black plastic.  All told there were 62 varieties of melons,  two to a basket, we made hundreds of gopher cages to protect the melons.  All varieties were planted together in the same row, and were marked with stakes.  Melons were separated by watermelons to avoid confusion as the vines grew in size.  Many of these melons we had not trialed before, and did not know what they would look like.
In the photo, you can see that as the vines grew, telling the watermelon vines from regular melons was easy and really helped us keep the melons from getting confused.
As the melons started to come in, it quickly became clear that we would not only have to figure out the optimum harvesting time, but also a way to keep them all separate, as once they were separated from the field tags, many were difficult to tell apart. 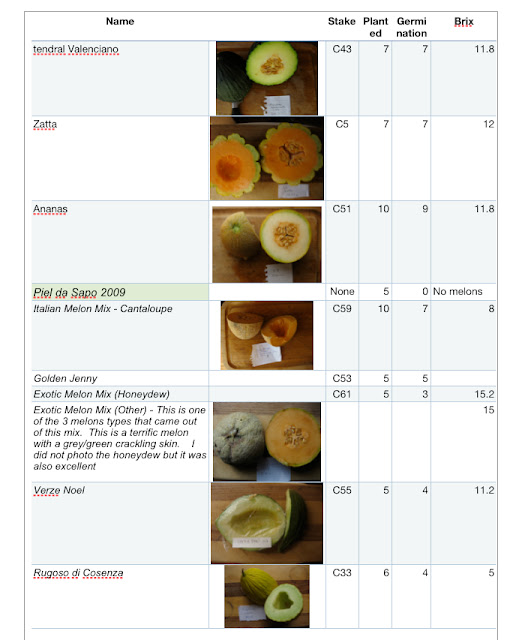 In an effort to get every melon from the field to the barn without confusion, we brought them in by Radio Flyer.  Although this made for several trips from the field, it resulted in fewer melon mix-ups.
We harvested melons in pairs, one person calling out the stake number and harvesting, while the other labeled the melons and placed them in the wagon. 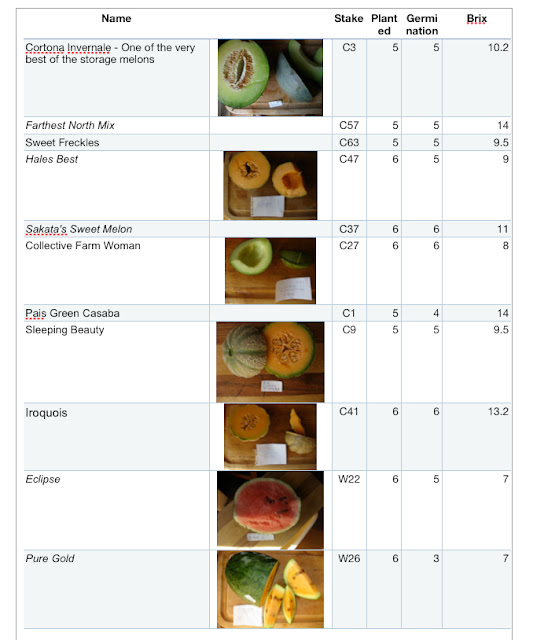 Not every melon was harvested at it's optimum.  Some were harvested, and tested and delivered to the CSA without photographs being taken.  At one point so many melons were ripe that a few did get mixed up and we were unable to tell which was which because the photos were taken without labels in the photos.

Once in the barn, we put the melons in flats and stored them with the stickers on, keeping like varieties together.  The melons to be tested were washed, tested with a refractometer, sampled for flavor, photographed, and seeds saved. 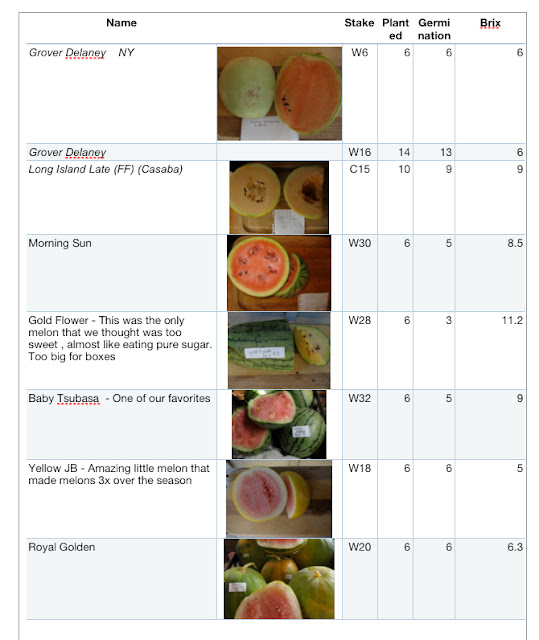 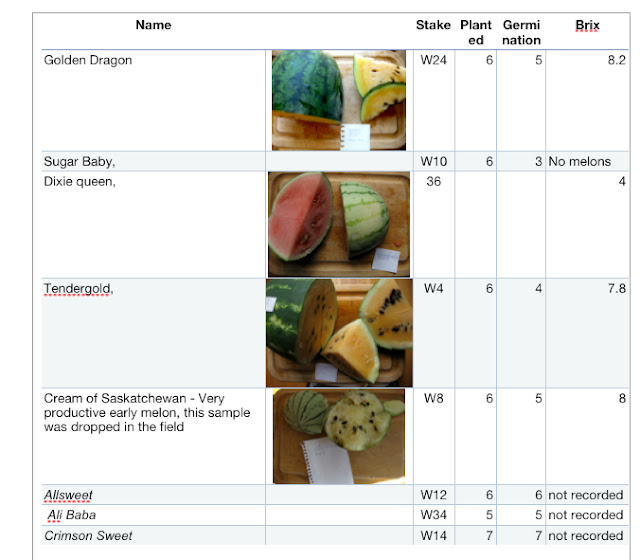 Although it is certain that some of these seeds will be crossed, at another time in the future we hope to replant some of our favorites to see what these crosses result in.  Especially since each melon was separated by a watermelon, it should in itself be an interesting experiment.
Which brings us to our favorites.  Naturally going forward we will not be planting all of these melons.  We did love melons that either slip when done, or change color.  At a busy farm, this really helps to get the melon right.  It also helps to know what to expect with a melon.

For those of you who helped taste all these melons, thank you.

Our original intent with this trial was both to find more melons that are not listed in the seed catalogs, so that we could increase diversity.  And secondly to find storage melons.  Melons that will hold out for several weeks after picking, so that we can increase the number of weeks our CSA receives melons.

By far the melon that we found least likely to ever grow again was Charentais.  It cannot be transported and it doesn't keep.  Amongst the Spanish Melons that are the longest keepers, there's a huge range of taste and sweetness.   The best of these is not the sweetest!  Not every melon that does well in San Martin will do well in your climate.  Several of these are early, Collective Farm Woman, Cream of Sask, Farthest North Mix, etc..  The last melons to come out of the field were the Casabas.  The Bidwell Casaba is the very latest.

And a huge surprise was that one of the best melons of the whole season, came from a farmer in Cortona, Italy.  Thank you Emanuele!

I especially want to thank Leo for his long hours in the field, preparing beds, planting, and harvesting.  And Zack who helped harvest, label and taste melons.


Posted by Foothill Farm at 3:29 PM No comments: