You need to sing to Danny Elfman's music to get the tune correct.

So, since we were kids, no Halloween costume was ever purchased.  You could rummage in the spare closet, go to Goodwill and pick up needle and thread.  Most of Zack's years were spent combing Goodwill for likely fabrics to be a pirate, a Ninja, a Knight...basically Zack would be anything that allowed you to carry a sword.  Now we have a costume trunk, that's fair game for anyone to raid.

So, Leo was getting tired of being a Wizard every year.  It's been too hot for too many years for him to wear his Tigger suit, and I think he was burnt on pirating as well.  (You can only do so much Yo Hoeing when you are a farmer).  So after a bout of bronchitis and bed rest with Outlander I began channeling Dougal MacKenzie and decided I needed my own BAMF.

This outfit is not exactly correct.  And I will say that after months of looking I gave up on finding plaid at Goodwill and settled for Hounds tooth.  So, please don't write to me the fact that there was no Hounds tooth in the 1770's.

Shortly after Leo got his linen shirt and wool waistcoat, he asked me, "What? No ruffles?"  So muttering to myself and went back and added ruffles to the shirt.

The next night Leo said he was just kidding.  So, now that Halloween is over, the ruffles are going.  They are a nuisance and he keeps dipping them in his pint.

So, at Goodwill I purchased a Hounds tooth Jacket.  (Hey Ralph, how about some plaid?)
There were six brand new Ralph Lauren Jackets.  I found one in a size smaller than Leo wears as a jacket and turned it into a waist coat.

And yes, that was a pain in the butt.  Also, the tartan that Dougal wears in Outlander is not a Mackenzie Tartan, but one that was woven just for the film by Anthony Haines Textile.  And no, it's not for sale and I do not weave tartan.  Nope, never have.  I only found one piece of plaid even slightly this color and that was a plaid from Pendleton.  So, I had to settle for another fabric.

For the breeks I found a pair of black leather pants at Goodwill, cut them off, and turned them into breeks and put buttons on the side.  I also found a cashmere coat and turned it into an overcoat.  I was going to make him a proper Beret/Bonnet, but Leo always wanted one of the caps he's wearing.  It's from Scotland and looks wonderful on him.  Don't you just love the green wool kilt hose?

I couldn't get Leo to wear a kilt.  He was worried that I'd have my hand up his skirt all evening. ...

We had the silk neckstock in my drawer, left over from a dye class.  Leo didn't snug it up as he was already wonderfully warm, wrapped in linen, wool and cashmere.  He found it to be a most comfy costume.  Especially since we had rain!  First rainy Halloween Night in about 70 years.

And of course since Dougal was sleeping with the Duncan Witch, well,  I could just go as myself.

My skirt consists of all the mistakes and leftover bits from previous sewing adventures.  Properly shredded and attached to a waist tie.  I also have a long green shift dress on.  I knitted and felted my hat.  The pin on the front says "Black Hat Society, Since 1692".  This is my LEED's costume.  Since it's all recycled, that makes me a Green witch? 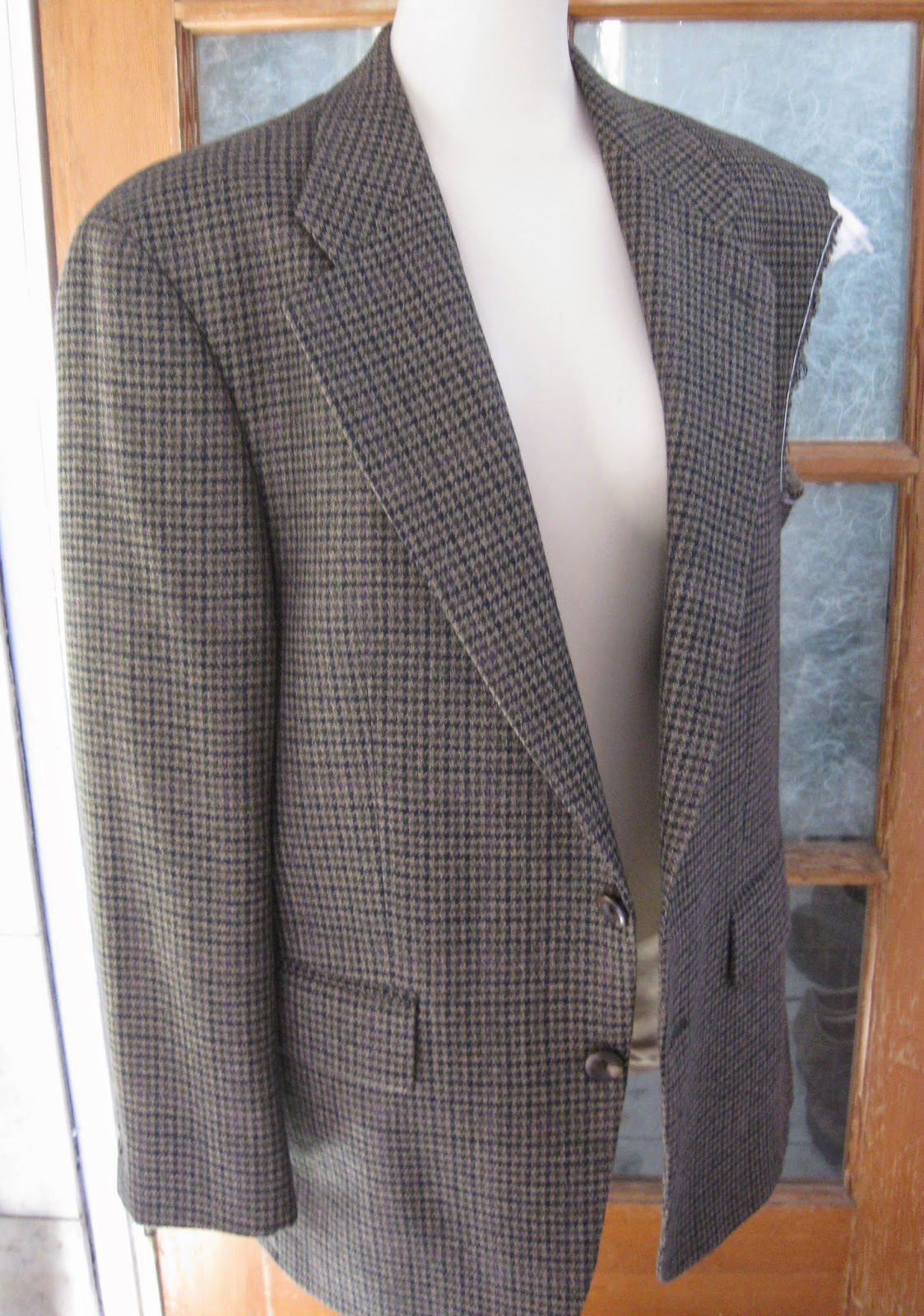 We witches do go back a bit don't we? 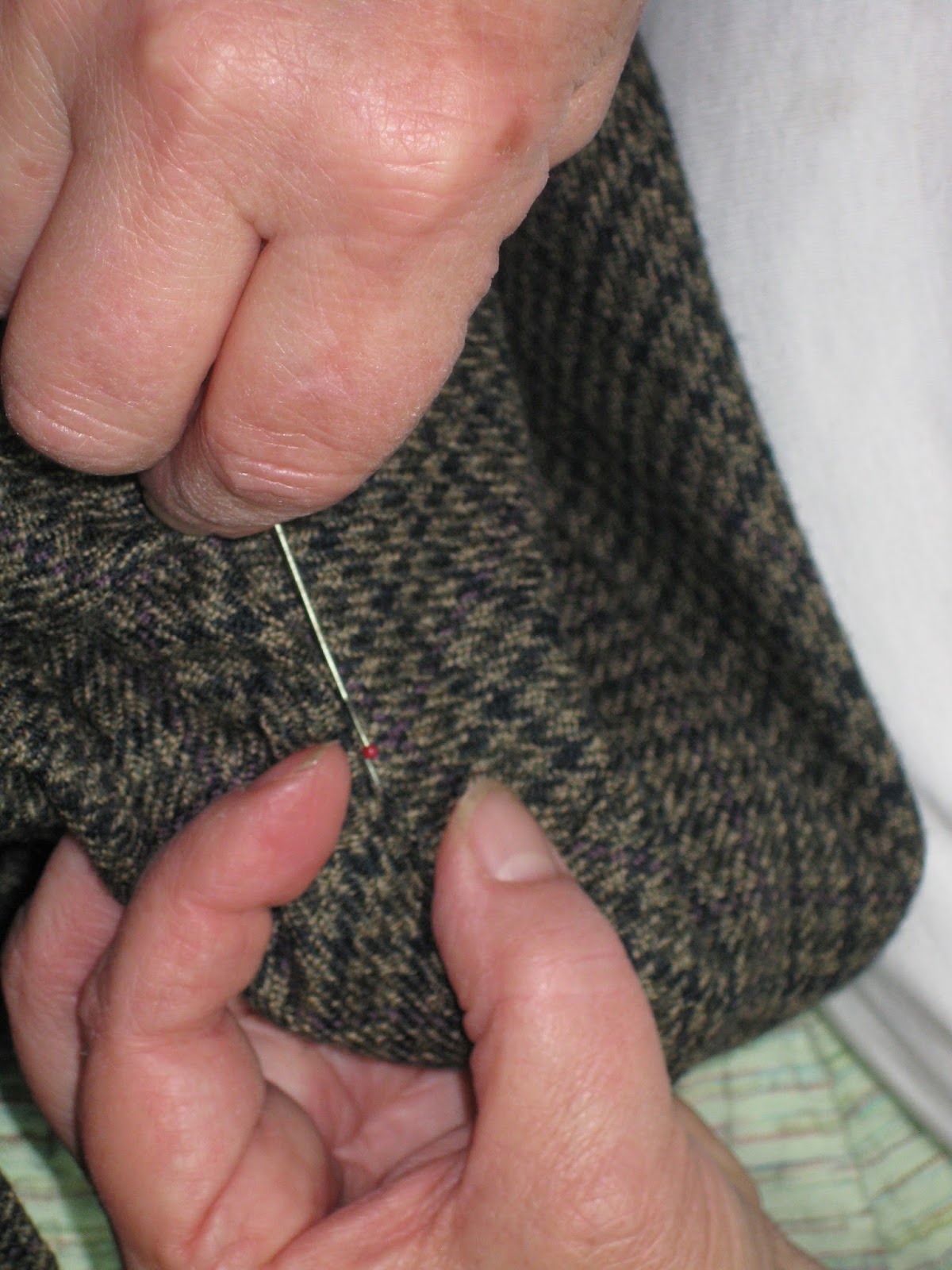 So back to Leo's costume, this is the original jacket.  As you can see, I already started removing the sleeves.  This was very time consuming as each sleeve was sewed on twice, once at the lining and once on the wool.  Plus there's tons of padding in there.   At one point I had to actually rip from the outside!  Scarey!  So that I could find the thread I was ripping from the inside.

After I got the sleeves off, I took off the collar.  Now that was such a pain in the butt, if I were to choose again, I'd leave it on.

I pinned the lining back to the inside of the armholes and hand stitched the waistcoat openings. 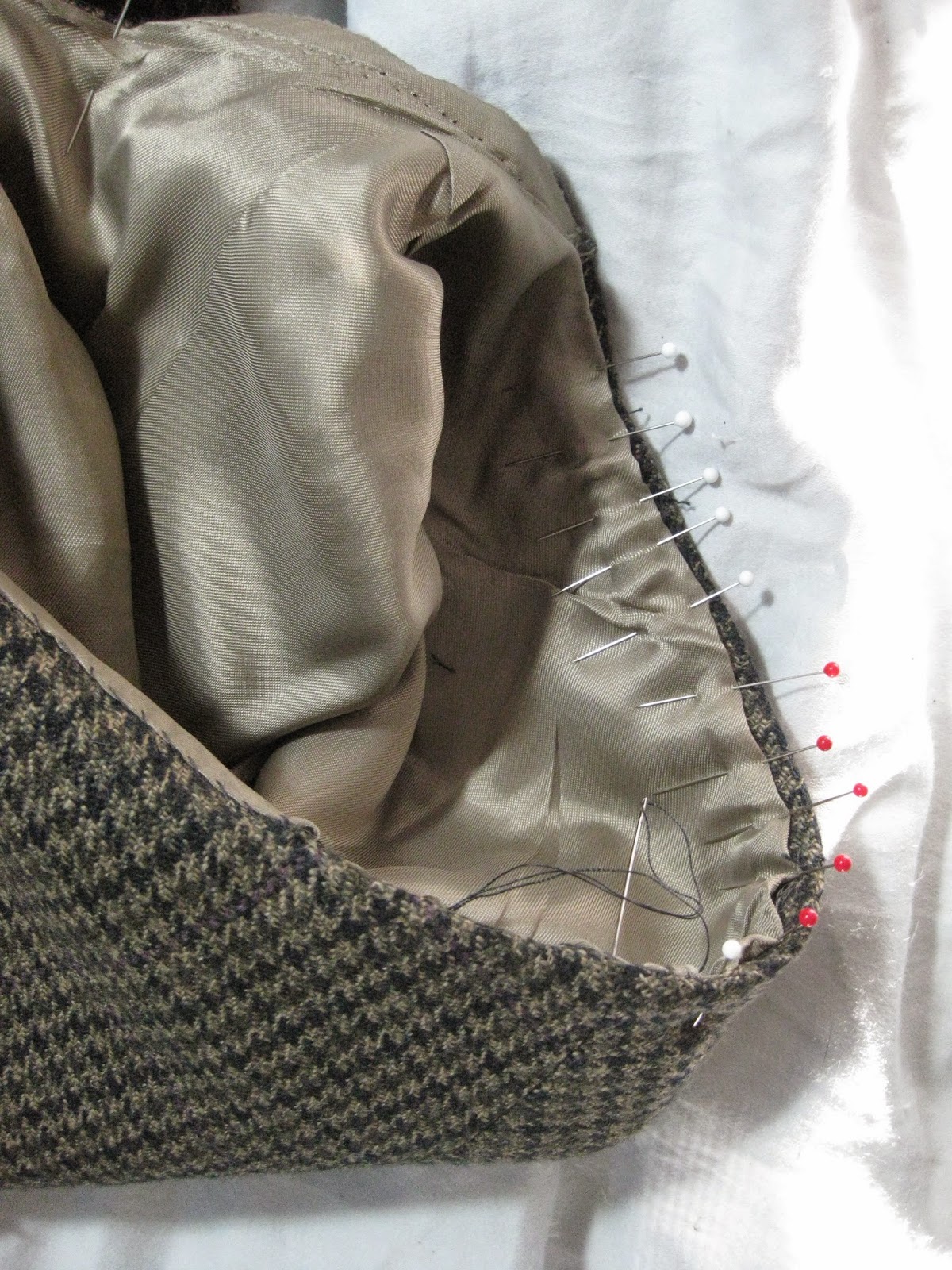 I used a lot pins in this and eased the lining between the pins.

When I got the collar off, the sleeves removed and the openings closed, I commenced to make button holes.  I have a Viking Sewing machine and it makes SHITTY buttonholes.  That made making this many buttonholes on the waistcoat a nerve wracking experience and I had to rip three of them out.  As they did not meet my standards even slightly.

The original jacket had 3 buttons/Button holes.  I needed to have 10, so I added 7 more.  I left the 3 originals.

I recycled the buttons from a shirt I made Leo many years ago.  I used the excess buttons on his breeks. 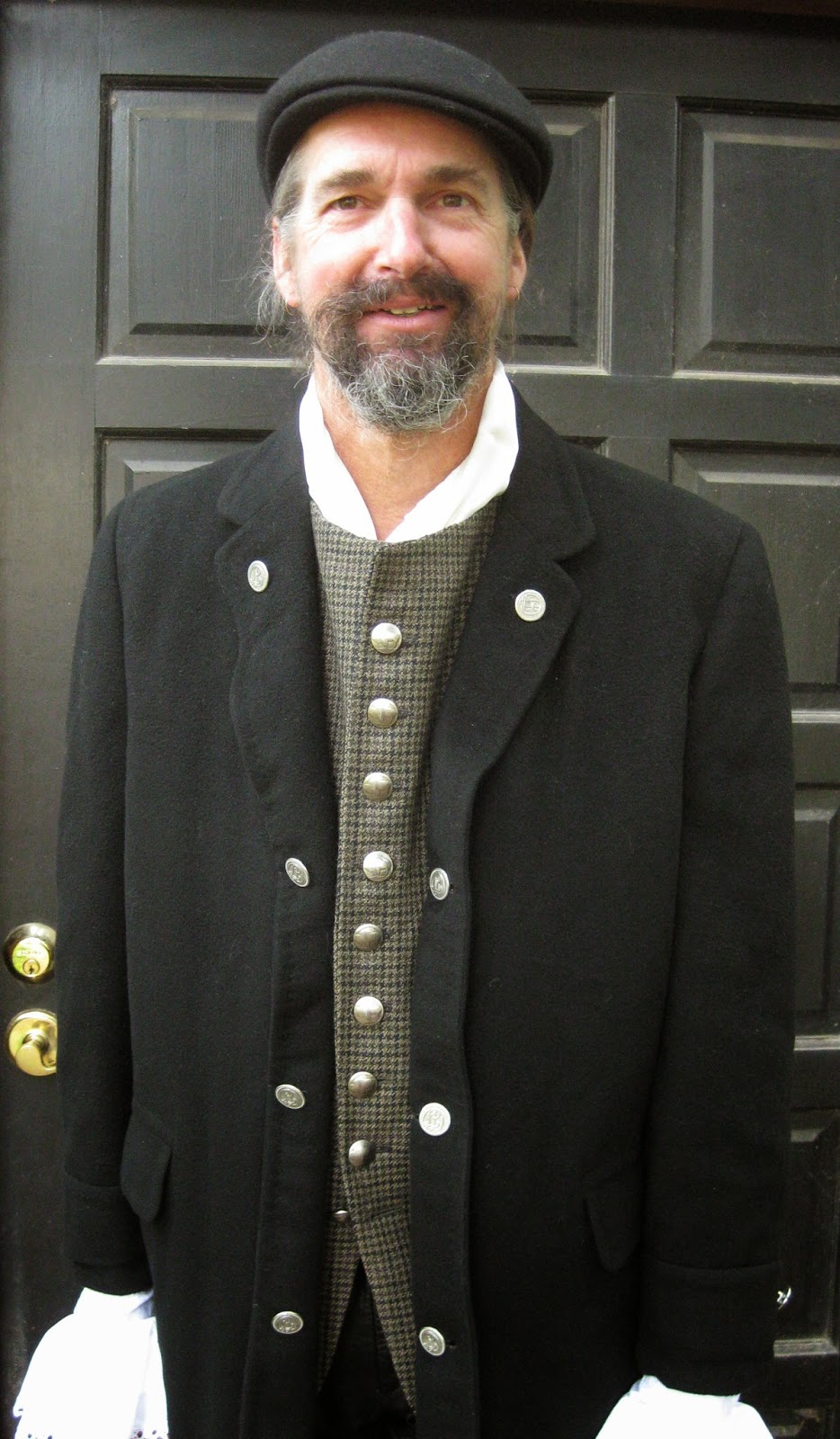 I spent as many hours scoping for a coat, that I probably could have made one from scratch and believe you me, if I could have found a tartan, I would have.  But Leo loves cashmere and so I settled for this coat.  It's not as skirty as I would have made it.  Now that Halloween is over, I'm going to move all the buttons to one side, and make more buttonholes, similar to the vest.  I had a hard time finding a coat in Leo's size.  The sleeves on this one were short, so I had to let them down. 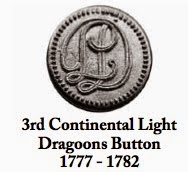 The buttons on the jacket have Leo's initials (LD).  These are pewter reproductions of the 3rd Continental Light Dragoons, also known as "Martha Washington's Horse".    I found them at Jas Townsend.   And yes, you could buy this costume there, and it would be mostly historically correct, but it would cost you.

So what were the costs:

The shirt and socks will return to Leo's wardrobe, as he needed knee socks for under his rubber boots anyway.  And good wool socks are getting more expensive all the time.  The scarf goes back to the dye blanks drawer.  And Leo is going to turn this coat into an every day coat, as soon as I shift the buttons.  All and all it was a fun project.  I'm left with a couple of ruffles, 2 wool sleeves, but I get to keep the BAMF.  Hey and mine has more hair that Dougal!

Posted by Foothill Farm at 3:58 PM No comments: